What a race, 500 laps in One hour and fourteen minutes.  There was plenty of give and take, some poor tire choices and long run strategy all in one event.  Having never run one of these long events before I elected to go with my standard setup for a regular race and see what happened.  A few of the guys were telling me that there was no way I was going to last setting that kind of pace.  Oh well, time will tell.

This race had it all, lead changes, tire changes, flipped cars, spinning cars, the Man-Up rule, blocking to stay one the lead lap and the dad-gum Lucky dog rule.

When all was said and done, only three cars remained on the lead lap, with the last fuel stop being made with only 50 laps to go, it was a 50 lap shootout to the end, then wouldn't you know it someone threw out a water bottle with only 14 laps to go bring out the caution.  Ok no water bottle but I thought it was funny.  The running order was Scott, Joe and Jerry left to fight it out, all cars on the lead lap and a 500 lap race comes down to a 13 lap shootout.  Scott on the point and had been having a little trouble on the restart lighting up the tires coming off of two, so this was Joe's chance.  Scott took it easy off two, kept it straight and put some distance between the TCR #6 and Joe's TNT with Jerry fighting a bad right front in third.

That is the way it would end up, Scott Harper taking the win, with Joe DePinto in second and Jerry Evans bringing home his TNT in third.

It was a blast and hopefully next year it will only continue to grow. 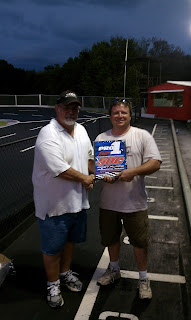 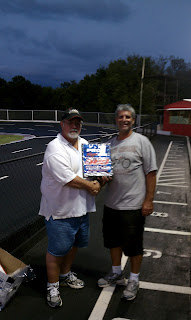 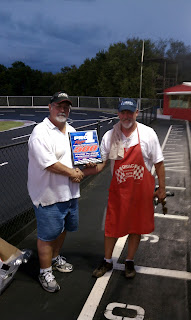