Seven (7) cars were on hand for the Points Race #6 the last of the Point Races before the Points Resort. The weather was in low 90s but there was some wind blowing that was much appreciated by the racers. Today’s race was the last chance to make some moves up the leader board for the Points Reset after this race.
The Top 3 Single Car Qualifying results were Jerry Evans (TNT) 1st @ 6.444 seconds, 2nd was Wayne Rogers (Lightning) @ 6.669 seconds and 3rd was Mike Clark (TNT) @ 6.931 seconds.
Jerry has been the King of Qualifying and has been the Top Single Car Qualifier in all Six (6) of the Points races so far and has all Six (6) of the Bonus Points that have been available.

Group 2 Racers were Eddie Dunn, James Adamson and “Fast” Eddie McCray. It was great to see Fast Eddie back at the track as he has had family and medical issues this year and he was ready to race and it showed on the track.

Group 2 Heat Wins were Heats 1 & 3 by Eddie Dunn (Lightning) and Heat #2 by “Fast” Eddie McCray (Lightning). Eddie Dunn wanted to know which Eddie was the “Fast” Eddie and was told to mind his Elders, both Eddie’s took that with the sense of humor that was intended.


Fifty-four (54) laps in James Adamson would throw a fuel line and had to retire leaving Woody Trimble and Wayne Rogers to battle out for the win. Woody Trimble (TNT) would take the win by 0.970 seconds over Wayne.


As evident by the track times everyone was battling the track with everyone experiencing a slight push condition, some worse than others, as no one had ran a lap in the 6.1s yet. Would that trend continue?


Jerry Evans would stay out front until till the fuel break at Lap 75. Mike Clark was 2nd, Wayne Rogers was the biggest mover from 6th to 3rd, 4th was Eddie Dunn, 5th Woody Trimble, and 6th “Fast” Eddie McCray. The top four (4) were on the lead lap.
Right after the fuel stop Eddie Dunn would have some mechanical issues and had to go to pit lane to fix the issue and he would return back to the track dropping several laps.


On Lap 126 Woody Trimble would break his right front and would retire. Woody had a fast car and ran the 3rd fastest lap of the A Main in 6.187 seconds on Lap 64.
Jerry continued to stay out front and Mike Clark would put pressure on him on the restarts but Mike could not get up beside Jerry and/or make a move on Jerry. Jerry Evans in his TNT would lead all One Hundred Fifty (150) laps and take the Win of the A Main and the Bonus Point. 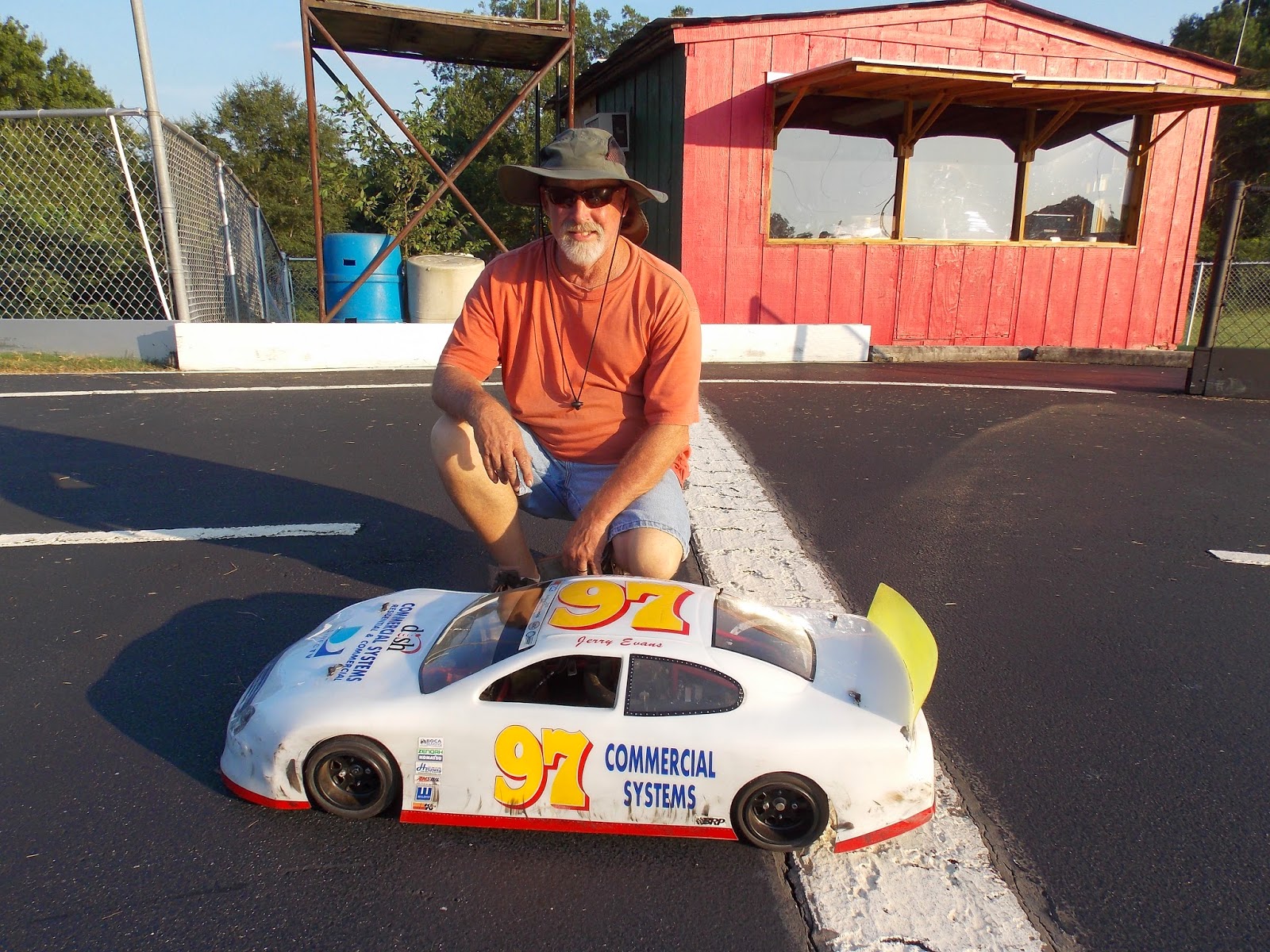 Posted by James Adamson at 3:22 PM