There was another very good turnout with eleven (11) racers present for Points Race #2.

The temperature was abnormally COLD this time of the year with a High of just 58 degrees and the wind was blowing at 10 miles an hour which is about 15-20 degrees off normal. The Racers from other tracks up north were throwing us a curveball and cursed us this weekend.

It was good to see Art Roper back at the track for just his 2nd ¼ Scale race ever.

We continued our preparation for the QSAC NCS#1 and we ran a timed qualifying session.

For full timing and scoring go to http://www.lagoonparkraceway.org/p/2015-track-championship-timing-scoring.html

Scott Harper would just dominate this race with only Jerry Evans able to stay on the lead Lap. A late caution kept Jerry in the race but Scott had the car to keep Jerry in 2nd.

Group 1 Heat #2 Racers were inverted and had Art Roper on Pole.

This was the Race of the Day as “Fast” Eddie McCray & Cliff Scales battled each other very hard with side by side racing, cross over moves and just some great racing. Tim Smith was right behind them waiting for somebody to make a mistake. Eddie lost his handling around lap 33 leaving Tim Smith to catch Cliff Scales. Tim Smith tried to run down Cliff but would come up just short finishing 0.335 seconds behind for 2nd.

No one could stay with Scott Harper as he lapped the field which is not something you see with the quality of completion that is here at Lagoon Park Raceway. Scott definitely had his cold weather setup dead on.

Cliff Scales was the best handling car of this heat even though there were 4 cars on the lead lap. A late caution tighten the field back up but Cliff just drove away from everybody for the win. Wayne Rogers had a great restart (which he is known for) did move up to 2nd on the late race restart dropping Tim Smith to 3rd.

B Main Racers were Eddie Dunn on Pole, Eddie McCray, Art Roper, James Adamson, and David Poham who DNS. Three (3) of the drivers would Bump Up to the A Main.

James Adamson would drop out on Lap 17 leaving the other drivers in the Bump Up positions.
Eddie Dunn would dominate and lap the field.

Tim Smith would have problems early and would drop out on lap 27 and would finish 9th.

Scott Harper and Jerry Evans would run 1st and 2nd in order until the halfway fuel stop at lap 75. Cliff Scales would be 3rd, Wayne Rogers 4th, Eddie Dunn 5th, Eddie McCray 6th, and Art Roper 7th. Not much passing action going on. Art Roper was getting some very valuable track time and was making improvement in just his 2nd ever race in ¼ Scale.

Cold weather was really causing track lap times to climb during the first half and there were also two slight rain delays during the 2nd half of the Main.

A late race caution closed the gap between the top 3 and there was a restart on lap 145.  However no one could catch Scott and he would Win the Main and the Bonus Point that goes with winning the Main. 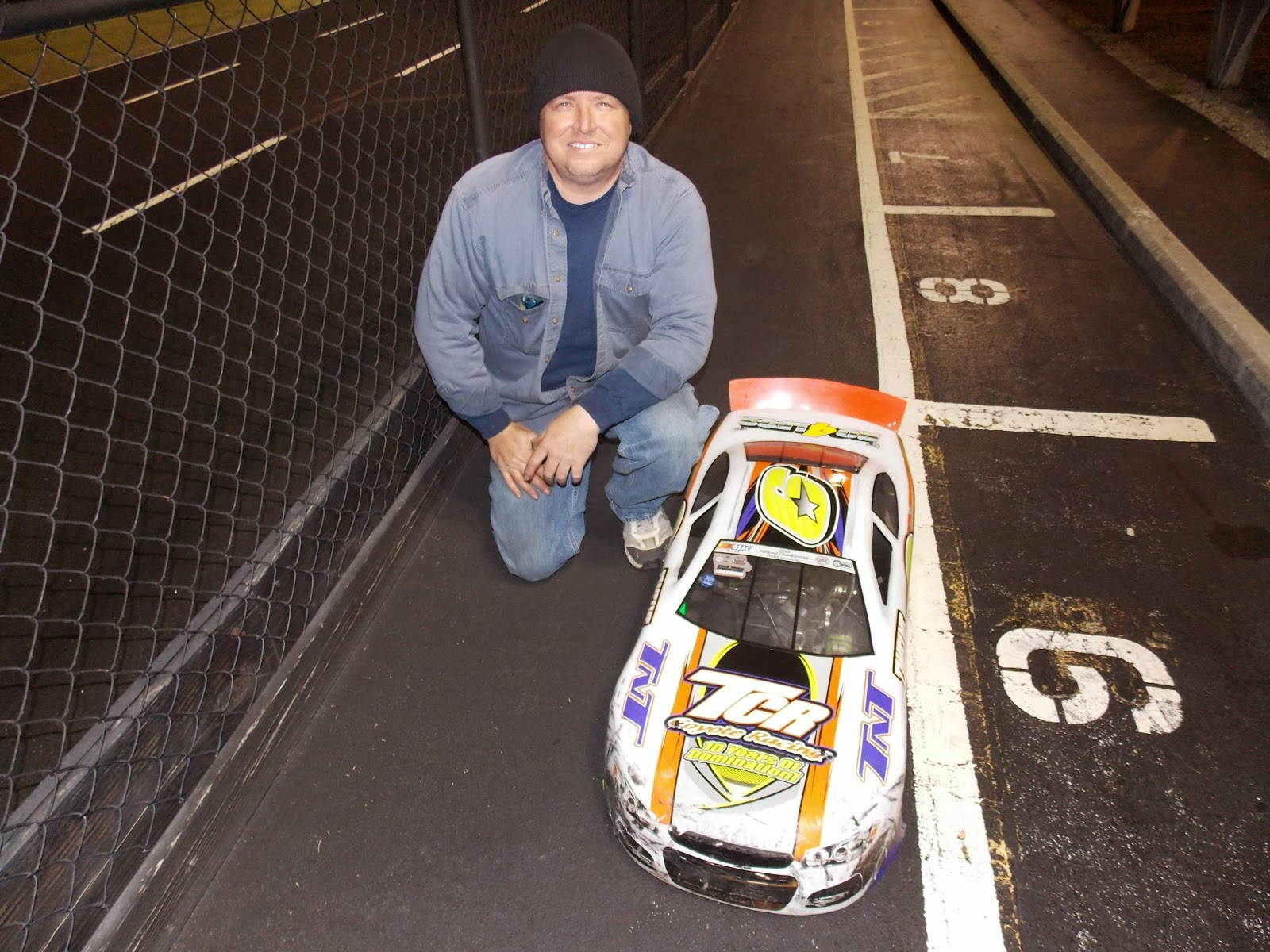 Posted by James Adamson at 3:37 PM