A good turnout with ten (10) racers present for Points Race #4.
The temperature was Hot in the mid-90s.

Would like to welcome David Swearengin back to ¼ Scale Racing.

For full timing and scoring go to http://www.lagoonparkraceway.org/p/2015-track-championship-timing-scoring.html

Woody Trimble controlled this race from the start but did not run away with it. Art Roper kept the pressure on but Woody’s lap times were more consistent than Art’s which was the difference in this race.
----------------------------

Limited Sportsman Heat #2 Racers had the field inverted with Art Roper on pole.

Sportsman Group 1 Heat #2 Racers were inverted and had Mike Clark on Pole.

Mike would hold the lead the first 23 laps until Jerry Evans who worked his way from the back took over and led the last 26 laps of the race. Early in the race Tim Smith spun and was nailed by James Adamson which would cause some damage to both cars and they were never on the same pace after the contact.
----------------------------

Sportsman Group 2 Heat #2 Racers were inverted and had Eddie Dunn on Pole.

It was a strange race with Eddie Dunn having handling issues and Scott Harper quickly working his way up to 1st on lap 6. After his fast lap on lap 19, Scott’s time starting climbing drastically and on lap 30 Scott went into the pits for adjustments. This left the race in Wayne Rogers’ hands and he went on to lead the last 19 laps of the race for the win.
----------------------------
Limited Sportsman Heat #3 Racers had Woody Trimble on pole.
Heat Results:
1st Woody Trimble (PRO1)
2nd David Swearengin – 1.224 back
3rd Art Roper

Fast Lap of the Heat – David Swearengin (Lightning) in 6.520 seconds.

David Swearengin quickly took the lead from Woody and would lose it back on lap 5. This heat again was won by Woody Trimble by running much more consistent lap times than David as he was still getting used to being back racing a ¼ scale.
----------------------------

This was the Heat of the day. Jerry Evans would led the 1st 19 laps until passed by Mike Clark. James Adamson passed Mike for 1st on lap 23 and held it until lap 34 where Jerry Evans went back to 1st. Everyone’s times were close together with Jerry running the most consistent lap times which lead Jerry Evans to the heat win. A late caution caused the heat to finish under yellow.
----------------------------

The Heats were tabulated and the Bonus Point for TQ of the Heats was awarded to Jerry Evans.

Racers scrambled as easy-ups and electronics would both in harm’s way. It was great to see racers who did not have easy-ups help out those who did. In short everybody got wet.

The rain came late in the afternoon so the track was lost for the night. Thus the results for the Mains reverted back to the results from the Heats with the seeding’s determining the Main Results. 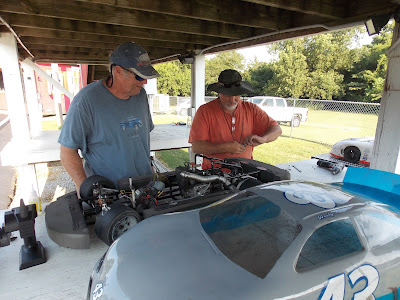 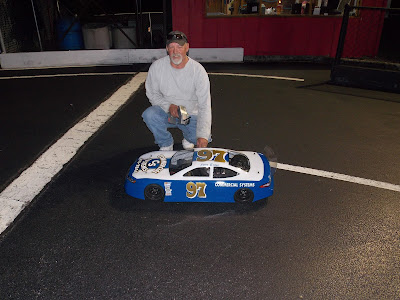 Posted by James Adamson at 8:15 PM