Actually a good turnout for the Finale’ Points Race # 4 of 4 even though the Weather was very threatening with a High Probability of Rain. Randy Brown again made another race at LPR – great to have you here. Got to love his Paint Scheme on his car. 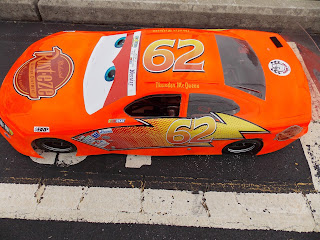 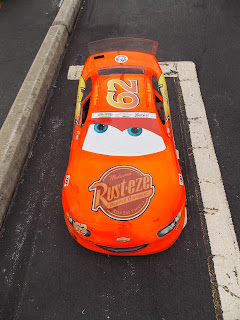 The 2015 Track Championship was on the line although it would take some unusual finishes to effect any of the positions currently held. But you never know with racing and also what if any the Rain that was coming would affect those finishing positions which could cause position changes.

Weather was still looking good at that time.

For full timing and scoring go to: http://www.lagoonparkraceway.org/p/2015-track-championship-timing-scoring.html

Scott Harper led all 50 laps of the heat but Jerry Evans stayed right behind Scott with a fast lap of 5.954 seconds – just 3 thousands of a second difference behind Scott’s Fast Lap. The Top 15 for Scott Harper was 6.011 with Jerry’s being 6.055. Scott just would not let Jerry make any moves on him to take 1st and won the race by 0.918 seconds ahead of Jerry Evans. Randy Brown ran a fast lap of 6.016 seconds and a Top 15 of 6.083 and stayed within striking distance of both Scott and Jerry to finish 3rd – 2.466 back. Mike Clark even ran sub 6.1 laps and finished 4th.

Eddie Dunn would lead almost all of the 1st half of the Heat until James Adamson passed him for 1st coming out of Turn 4 on lap 24. James Adamson would pull away from everybody and built up a half lap lead until a caution on 44 – a caution that James did not want to see.

On the restart on lap 46 Wayne Rogers got his normally good restart which he is known for and got inside of James going into Turn 3. James and Wayne stayed side by side thru 4 and across the time line going into Turn 1 with Wayne just ahead.

With James and Wayne running side by side both Eddie Dunn and David Swearengin would get in line behind Wayne Rogers and both would freight train past James Adamson dropping him to 4th where he finished.

In the 20 Minute time between Heats the weather started looking worst all of a sudden and just as Heat 2 Group 1 was starting their warmup laps it began to sprinkle lightly. The cars were pulled from the track and a few minutes later a popup shower hit the track. Behind the shower there was a clear area coming in – maybe the track would not be totally lost.

As per Club Bylaws if two (2) Qualifying Sessions are ran then the results would be official.

Thus the points were awarded as follows:

How would these results effect the 2015 Track Championship for Lagoon Park RC Raceway?

Actually a couple of the positions got closer but there was not any changes for position.

The 2015 Track Champion for Lagoon Park RC Raceway is: 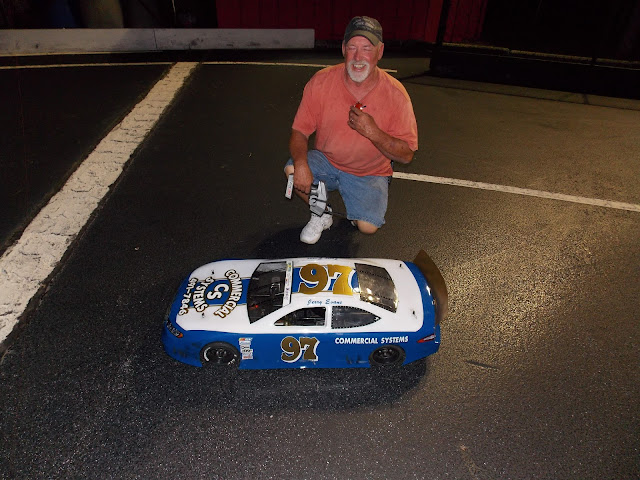 To see all the Point Standings for the Track Championship:  http://www.lagoonparkraceway.org/p/2015-track-championship-points.html
Posted by James Adamson at 8:39 PM